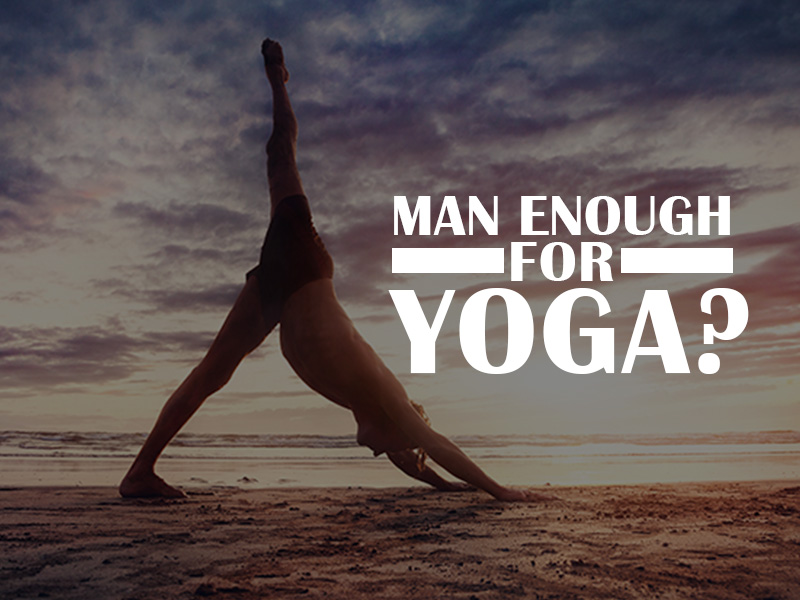 My fellow Delhi peeps would recall being part of the huge number of people answering the call of our Prime Minister to do Yoga at the Rajpath on International Yoga Day. I was one of them too.  But less than a few of those Yogis ever practiced yoga after that. Like me, there were serveral other dhongi yogis that day.

With this blog, I’m trying to beef up (is there a meat ban on the word too?) yoga for us boys. Continue reading to learn about 9 reasons why all men must practice Yoga.

1.) Power Yoga: Think yoga on steroids. Next time you feel inclined to call her yoga routine wimpy, try it yourself.  While your arms and core think they’ll earn a breather after 30 seconds in a plank position, you’ll rotate right into plank variation downward-facing dog. You’ll sweat through push-ups and (attempted) hand stands while getting a killer stretch.

2.) Bikram Yoga What do Michael Jackson and Pope John Paul II have in common? They each tried Bikram Yoga. It’s a 90-minute yoga class featuring two sets of 26 poses in 40-degree heat. The heat improves your muscle elasticity, making it easier for you to bend into poses like the Triangle Pose, which works your legs, core, shoulders, and back muscles, says founder Bikram Choudhury.

Try this form out in the extreme Delhi heat!

Best For: Runners with tin-man joints.

3.) Broga: This, as the name suggests, is yoga for bros- Bro+Yoga- Broga. This form is made for you to try out with your bros. More robust and loaded with familiar cardiovascular exercises, you’ll knock out pushups in between traditional poses like the bridge pose, which works your back muscles, in one 75-minute session.

These three forms will be a good test for all you men out there!

But if you decide to become a true Yogi, the benefits of yoga are multifold:

So, regular sweating it out at the weights section just won’t cut it anymore. Yoga does have its benefits, and I for one can’t wait to spread that mat in the morning.
And, we at fitpass are all about flexibility. This is why we give you access to 1,250+ Best gyms and fitness studios and the freedom to choose from thousands of workout options anywhere, anytime – all with just one pass, fitpass.
Visit fitpass to discover more. And, don’t forget to Get, Set, Sweat!!

Attend Yoga Classes at these Gyms in Mumbai with FITPASS
28 February, 2020 Read More...

Boost Your Immunity with Yoga: Best Yoga Poses to Strengthen Your Immune System
19 May, 2021 Read More...