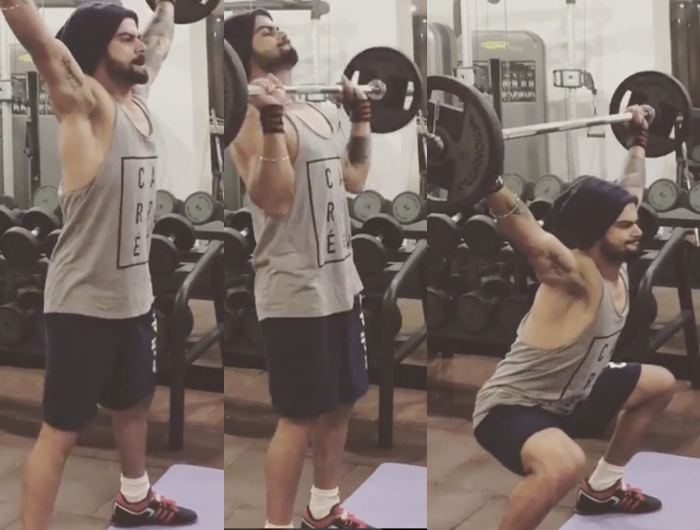 It is a fact that only through true hard work, perseverance and dedication can a person achieve greatness. Every now and then famous personalities, whether a sports icon or a celebrity, have proved and justified this fact by achieving their success while standing on the pillars made up of their devotion and zeal. One such great example, who has recently achieved a level of excellence in his field is none other than the charming and young blooded captain of the Indian National Cricket Team - Virat Kohli.

Virat Kohli has not only proved himself great in all three formats of cricket, but has also set an example of his calibre in the world of fitness. He is now one of the most potential influencers of fitness industry, creating awareness amongst young minds to help them lead a healthy and fit lifestyle.

Believe it or not, every young blood today desperately wants to follow the exact same workout routine that Virat Kohli has been supporting since years now. This is why, to help you build a fitness exactly like Virat’s we bring you a complete list of his fitness routines and diet plan. Therefore, revealing his personal treasure to make you become more healthy and fit.

So, what are you waiting for? Go through this blog and learn about all the secrets related to the fitness of Virat Kohli, 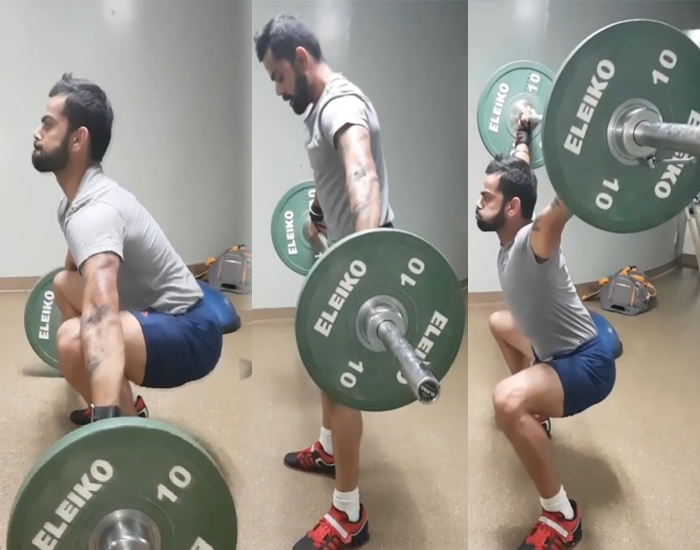 In one of his interactions with a journalist, Kohli said that whenever he is at home, he visits his gym 5 days a week which is followed by a resting session of two days. He even tries to take some time out for his workout when he is on a tour. He religiously follows the “Eat.Sleep.Train.Repeat” mantra to regularly maintain his fitness and according to him, this is the most effective pattern one should follow to remain fit.

b.) His Workout Plan: 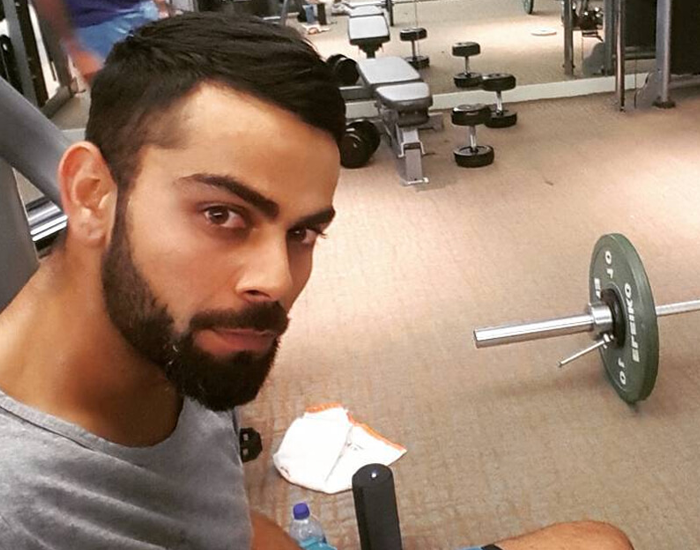 Virat Kohli follows a combination of both cardio and weights exercises as a part of his workout plan. According to him, former fitness coach of the Indian Cricket Team - Shankar Basu was the one who advised him to lift weights. He mostly uses weights to workout for his legs, which helps him generate explosive power in them ( Pretty much describes his amazing talent of running between the wickets ). He also mentioned in one of his interviews that fitness coach Shankar Basu makes him do crazy squats, close to a 100 in a session. 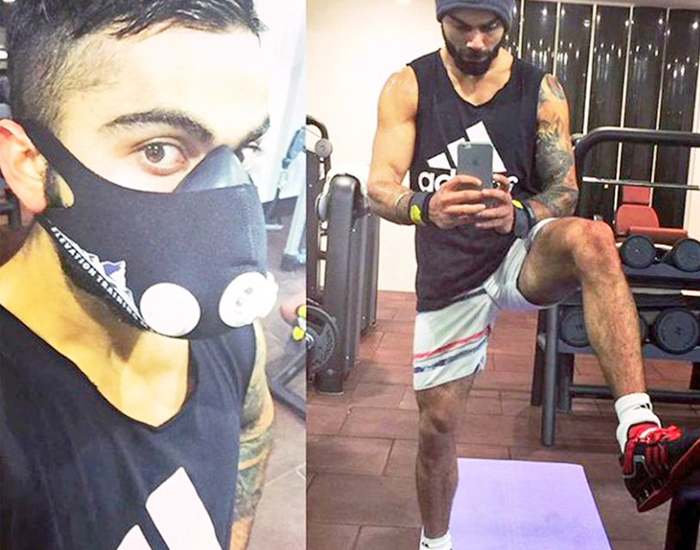 The Indian skipper loves adding high-tech gadgets into his workout routines to help increase the efficiency of his exercises. One of the first gadgets he added to his fitness routine was a high-altitude mask, which helped him improve his workout efficiency by conditioning his lungs which led to an increase in his stamina and energy levels.

Another hi-tech equipment that Kohli added to his workout routine is the Technoshaper, which helps him work on his abdominals and is also a great workout equipment for budding sportspersons.It helps in fat loss and provides a defined waist and a firmer skin. 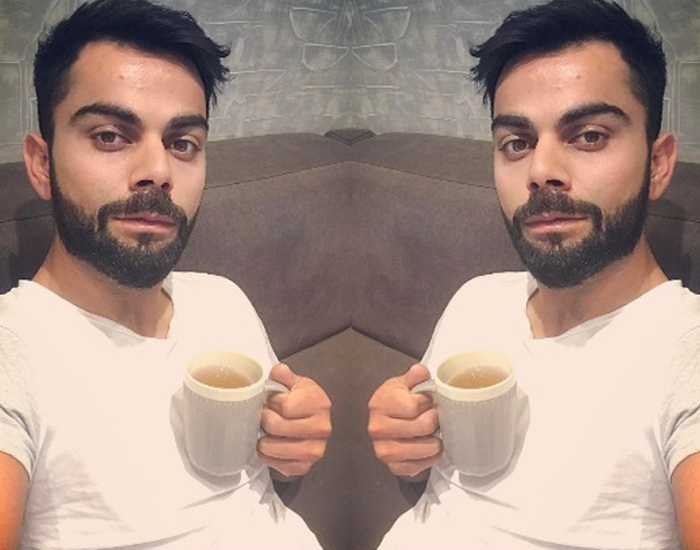 Virat Kohli is a true Punjabi at heart and a big time foodie as well. He has admitted in a lot of interviews that he cannot resist food and loves to explore new cuisines every time. He is a big fan of seafood and Japanese is his most favourite cuisine of all. In a lot of reports he has been seen promoting his high protein diet which includes dishes like lamb chops and pink salmon.

Here are a few tips one can note down to improve their own diet from his regular eating habbits:

a.) Virat always prefers eating home-cooked food. Also, he never follows the policy of eating less and working out more. Rather he eats in the kind of quantity which he knows his body can properly digest.

b.) Virat too avoids junk-food, like every other health conscious person. His favourite all time munchies include different types of nuts which he usually likes to combine up with a cup of black coffee. (A quick lesson for your kids)

c.) In an interview Virat has said: “I try to eat as light as I can for dinner. During game time, I have protein shakes with carbs. And I take my carbs from good sources. I don’t touch junk food unless it is in a place like Kochi where you are completely drained and it is a one-off.”

d.) Virat only likes to drink water from packaged mineral water bottles to avoid any sorts of water - borne diseases. Reports have claimed that he only drinks mineral water of Evian brand, which he specially gets imported from France.

5.) Virat completely avoids smoking and drinking alcohol, which explains a lot about his fair and glowing skin as well. He also Believes that such kind of bad habbits definitely become a huge hurdle between a person and its fitness objectives.

Even though it might look like that Virat supports a very strict and healthy diet plan but he also likes to support the idea of following a cheat day once in every few days. Relaxing right? Well in one of his interviews with Forbes, Virat quoted:

“People also suggest you shouldn’t make your body totally alien to this (junk) kind of food. Once you have a craving, it has a very bad effect on you so I try to have those ‘cheat’ days in between, but I don’t go overboard. The very next day, I make sure I burn that off.”

Well, this seems perfectly legitimate to me.

Well there you go, we just revealed Virat Kohli’s complete fitness routine & diet plan and delivered it right on your lap. But the real question is that will you be able to religiously cope up with a strict yet healthy fitness routine of the most famous and healthy athlete of our country perfectly? Well, if you have the right dedication, sense of mind and desperately want to get a fit and hot body like Kohli’s, then this is definitely going to be a piece of cake for you.

So, hop into your work out gear and be prepared to break a sweat. Just keep up with your hard work and follow the right steps with a dedicated mindset. Who knows, you might just become the next Virat Kohli.